This weekend is the National Book Festival in Washington, DC. Although the traveling bookstore will remain parked at home, I will go to work the Montana booth at that festival representing Humanities Montana.  It’s an opportunity to tell people about the wonderful writers we have here, to lure them to read Judy Blunt’s Breaking Clean, Debra Magpie Earling’s Perma Red, Craig Lancaster’s 600 Hours of Edward, Pete Fromm’s Indian Creek Chronicles and so many more. 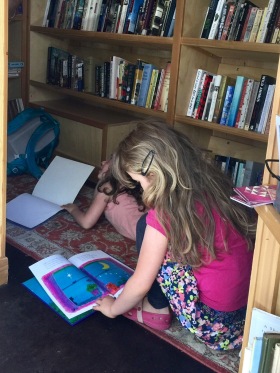 It’s a chance to let people know there is a rich literary tradition in a state that stretches across expanses of plains, forests and mountains.  Montana also has many talented writers under the big sky.

Then at the end of September the Montana Book Festival happens. The traveling bookstore will be there as one of many events including panels, readings, poetry slams, and of course, the infamous Pie & Whiskey at the Union Club on September 28.  I suppose my deep appreciation of these book festivals is akin to sports fans going to a tournament.  Its a rush to be surrounded by so many people who enjoy books and who want to read.  And, as often readers are good storytellers, I will surely get to hear some wonderful stories while at the huge Convention Center in Washington and when set up with the traveling bookstore on the streets of Missoula.

It is part of having this traveling bookstore business that I surely appreciate – the stories that people share (or hint at). Last weekend with the traveling bookstore at the Lincoln County Fair, a young boy typed a story about his pig.  In reality the pig was being auctioned at the fair and then sent to the butcher’s.  In the boy’s story, the pig had many adventures, being recognized for its cognitive abilities and bravery rather than its meat.  A girl with a Wonder Woman symbol painted on her face stopped to look at books and type.  She wrote a long story which she said was private, typing, going off for ice cream, coming back to type more. She did an entire page before pulling the paper out with a flair and heading back into fair activities, the page neatly folded and secure in the back pocket of her jeans.  And then there was the older gent who was searching for Louis L’Amour books.  Yes, there were a few in stock at the traveling bookstore, but he knew so much about Louis L’Amour that we eventually sat down so I could hear the full biography.  Stories and books.  Yes, definitely looking forward to the upcoming festivals.